In 1896 a German physics professor, Wilhelm Conrad Roentgen, presented a remarkable lecture entitled “Concerning a New Kind of Ray.” Roentgen called it the “X-ray”, with “x” being the algebraic symbol for an unknown quantity. There was immediate worldwide excitement. Within months, systems were being devised to use x-rays for diagnosis, and within 3 years radiation was used in to treat cancer.

In 1901 Roentgen received the first Nobel Prize awarded in physics. Radiation therapy began with radium and with relatively low-voltage diagnostic machines. In France, a major breakthrough took place when it was discovered that daily doses of radiation over several weeks greatly improved the patient’s chance for a cure. The methods and the machines that deliver radiation therapy have steadily improved since then.

At the beginning of the 20th century, shortly after radiation began to be used for diagnosis and therapy, it was discovered that radiation could cause cancer as well as cure it. Many early radiologists used the skin of their arms to test the strength of radiation from their radiotherapy machines, looking for a dose that would produce a pink reaction (erythema) which looked like sunburn. They called this the “erythema dose,” and this was considered an estimate of the proper daily fraction of radiation. It’s no surprise that many of them developed leukemia from regularly exposing themselves to radiation. 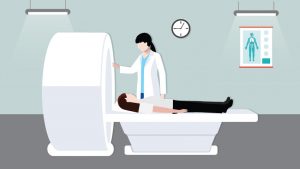 Advances in radiation physics and computer technology during the last quarter of the 20th century made it possible to aim radiation more precisely. Conformal radiation therapy (CRT) uses CT images and special computers to very precisely map the location of a cancer in 3 dimensions. The patient is fitted with a plastic mold or cast to keep the body part still and in the same position for each treatment. The radiation beams are matched to the shape of the tumor and delivered to the tumor from several directions. Intensity-modulated radiation therapy (IMRT) is like CRT, but along with aiming photon beams from several directions, the intensity (strength) of the beams can be adjusted. This gives even more control in decreasing the radiation reaching normal tissue while delivering a high dose to the cancer.

Stereotactic radiosurgery and stereotactic radiation therapy are terms that describe several techniques used to deliver a large, precise radiation dose to a small tumor. The term surgery may be confusing because no cutting is actually done. The most common site treated with this radiation technique is the brain. A linear accelerator, or special machines such as the Gamma Knife or CyberKnife, can be used to deliver this treatment.

Intraoperative radiation therapy (IORT) is a form of treatment that delivers radiation at the time of surgery. The radiation can be given directly to the cancer or to the nearby tissues after the cancer has been removed. It’s more commonly used in abdominal or pelvic cancers and in cancers that tend to recur (come back after treatment). IORT minimizes the amount of tissue that’s exposed to radiation because normal tissues can be moved out of the way during surgery and shielded, allowing a higher dose of radiation to the cancer.